The Lower Conant Area contains a total of 17 houses dating between 1870 and 1950, with all but two dating before World War I. Represented here are examples of Stick Style, Queen Anne, Shingle Style and Colonial Revival architecture. The Stick Style house at no. 15 is a particularly well-detailed example, one of only a few houses of this style in Weston. All houses in the area are of frame construction, with clapboards and shingles being the predominant exterior materials. 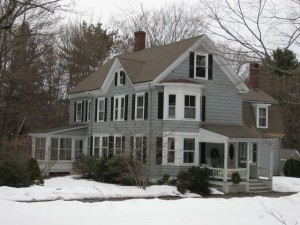 Development in the area began after the Civil War. The earliest house appears to be the Gowell / Parker House at 25 Conant Road, (ca.1873, Map #4), a 2-1/2 story Italianate example with simple detailing including a wall gable with segmental-headed window at bay no. 5 on the west façade and a well-detailed main entrance porch on the south gable end. The six by two bay shingle house has 2/2 windows with shutters. Extending to the rear is a gambrel-roofed ell.

The most elaborately detailed house in the area, the Justin E. Gale House at 15 Conant Road (1880, Map #2, MHC 259) is one of only a few Weston examples of the Stick Style. The 2-1/2 story clapboard and shingle house, sited at the top of the hill, features a wide array of porches, balconies, bay windows and other projections, a variety of window sizes and types, and a complex hip and gable roof arrangement, which adds to its visual interest.

The Justin E. Gale Barn is located at 17 Conant Road (ca.1880, Map #3) where the two-story, side gable building has been converted to a house with numerous additions to the three by two bay main block. The board and batten structure features a small decorative central wall gable and cupola with weather vane. Stone entrance posts mark the entrance into the property, on which is located a collection of large modern outdoor sculptures. 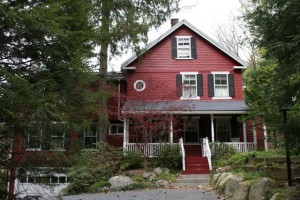 The Queen Anne style is represented in the area at the Benjamin R. Parker House at 33 Conant Road (ca.1892, Map #9), a simple example typical of Weston. The 2-1/2 story, three by four bay gable front house is clapboarded at level one and in the gable and shingled at level two, with a simple shingle-pattern band above the second floor. The entrance is located offset left, sheltered by a porch across the front with turned posts and a simple railing. Windows are 2 / 2 except for a small octagonal window at level two. A four-bay addition has been added on the north side.

The Ellen P. Hubbard House at 18 Conant Road (ca.1895, Map #16) is a handsome 2-1/2 story clapboard and shingle house, three by two bays, with a center entrance with sidelights, a one-story porch across the front with patterned porch railing, wide overhanging eaves with show rafters on the front façade, and paired brick corbeled chimneys on the ridge line.

The Lyman W. Gale House at 22 Conant Road (ca.1895, Map #15) is a 1-1/2 story gambrel-roofed clapboard house with a five by two bay main block, a rear ell, and a modern addition on the west. The house has a prominent center entrance porch with a semi-circular pediment. A long multiple dormer stretches across the lower section of the gambrel roof, which is covered with wood shingles. Windows are 6 / 1 with shutters.

32 Conant Road (1906-8, Map #14), a two-story, four by two bay clapboard structure with rear two-bay ell, has its architectural emphasis on the projecting two-story pavilion and one-story entrance porch at bay no. 3. The porch features an oversize triangular pediment with sunburst pattern, supported on Doric columns resting on paneled bases. Windows are 6 / 6.

The two fine Colonial Revival houses at nos. 3 and 6 Conant Road have not been included in this area form because they are part of the Boston Post Road National Register District. They are, however, part of the architectural fabric of the area and a brief summary of information follows.