Included within this area are 21 houses, several notable carriage houses, and a greenhouse on lots of between one and four acres. Houses are frame construction in Shingle Style, Colonial Revival and Tudor styles popular in the first two decades of the 20th century. Most of the houses are simple “country” versions of these styles, predominantly 2-1/2 story, with some smaller houses. Most houses have been preserved largely intact, with their original type of shingle or clapboard facing material; however, in some cases aluminum / vinyl siding has substantially altered design character.

The earliest house in the neighborhood, 50 Pigeon Hill Road (1891, MHC 254), is a well-detailed, idiosyncratic Shingle Style example designed by architect Samuel Mead as his own residence. This unusual, well-preserved property, which includes a carriage house and greenhouse on 15 acres, is discussed in detail in an individual inventory Form B.

Almost half of the remaining houses were built within a decade after Horace Sears subdivided the property in 1897. The Sears plan, prepared by W. A. Mason and Son, surveyors from Central Square in Cambridge, was the first in Weston to offer this type of planned residential subdivision located off the main road with a traffic pattern designed to discourage use of the streets except by residents of the neighborhood.

The first two lots in the Sears subdivision were purchased by another architect, Alexander S. Jenney, who built a simple Colonial Revival house at 44 Hill Top Road (1898, MHC 564, Map #12). 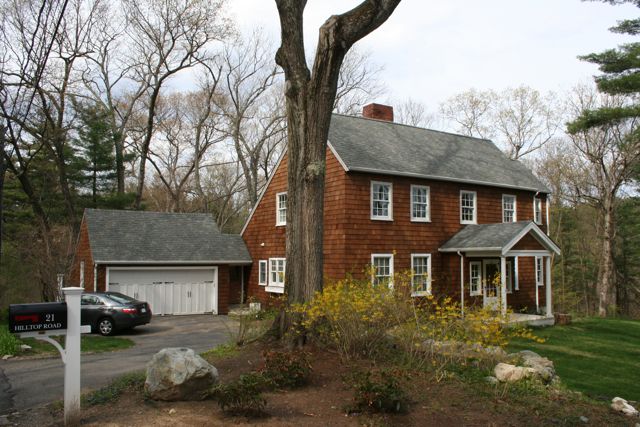 What was probably the next house in the neighborhood, 21 Hill Top Road (1898, MHC 560, Map #6), was designed in a more detailed and more “correct” version of the Colonial Revival that became popular at the turn of the century as architects and builders began to study Colonial prototypes more carefully. This house imitates the proportions and design of the New England “saltbox,” emphasizing the dramatic sweeping roofline by facing the house to the south so that the gable end faces the street. Other 18th century features on the four-bay, shingled house include 12/12 window sash and a large brick central chimney. 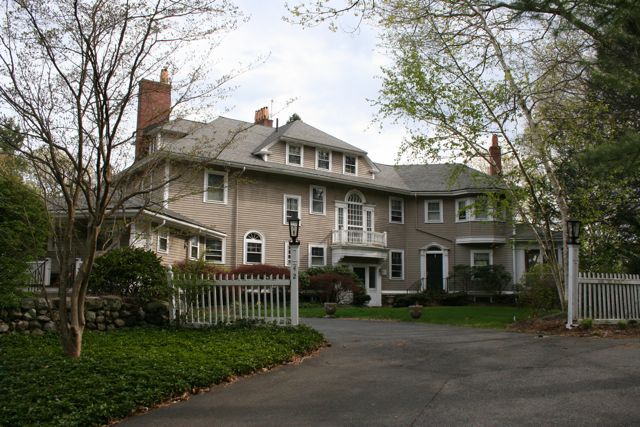 One of the largest of the Pigeon Hill houses, 42 Hill Top Road (1898-99, MHC 565, Map #14) is a 2-1/2 story, asymmetrical clapboard house with irregular Shingle Style massing and Colonial Revival details. Fenestration is very informal and irregular. Focus is on the central entrance, marked by leaded glass sidelights and a heavy hood with balustrade. Above the entrance is a large Palladian window. The house has a hipped roof and jerkinhead dormer.

The property includes a large two-story clapboard garage (MHC 566, Map #14) with a hipped roof, probably built at the same time as the house, also with an irregular fenestration pattern. 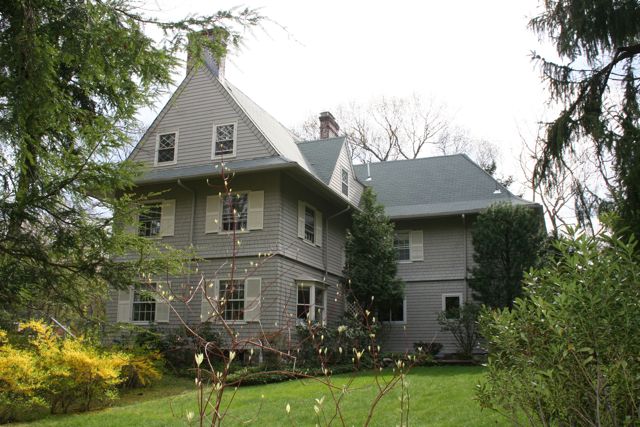 20 Pigeon Hill Road (1900, MHC 569, Map #24), probably designed by its original owner, architect Arthur J. Russell, is a simple 2-1/2 story Shingle Style house that retains the original dark brown color of the shingles. The house is L-shaped, with the entrance at the intersection of the L. The high pitched, hipped roof flares out over wide overhanging eaves. A two-car garage is attached at the west. 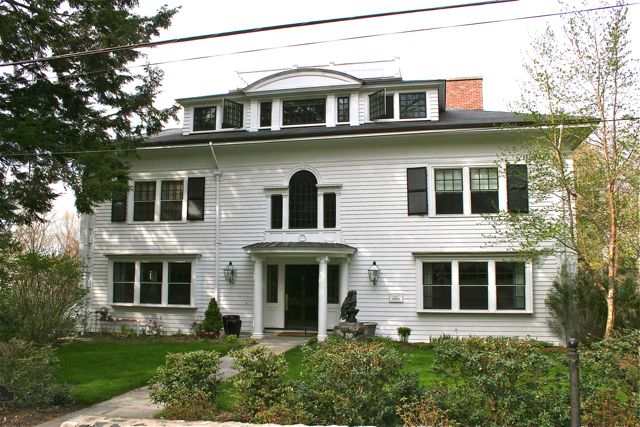 The house is divided into only three bays, with windows grouped by threes on the first floor and by two on the second floor. Design focus is on the center entrance, with its wide door and leaded glass sidelights sheltered by a one-story entrance porch supported by Roman Ionic columns. On the second floor above the doorway is a prominent Palladian window featuring a low-relief classical shell panel under the center light.

A photograph owned by SPNEA shows that this house has been altered in the entrance porch and roof / dormer area. At the rear of this property is a small 1-1/2 story combined staff house and one-car garage constructed of brick and shingles (MHC 561, Map #9). 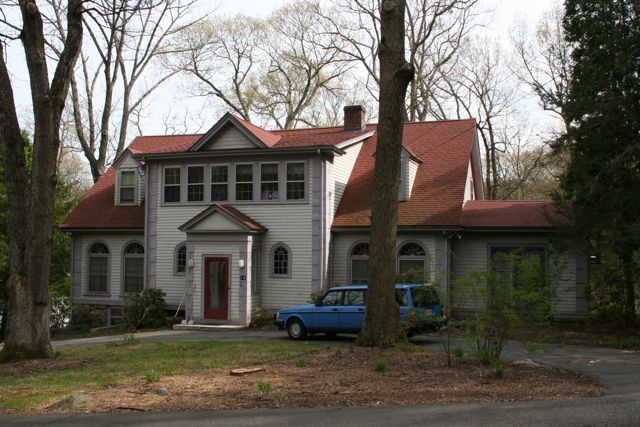 The unique design of 10 Pigeon Hill Road (1904, converted 1926, MHC 570, Map #25) reflects its origin as a schoolhouse rather than a residence. Much of the building is 1-1/2 stories; however, in the center is a prominent two-story central pavilion set off by quoins. A central one-story enclosed entrance vestibule is also ornamented with quoins. Round-headed windows with fanlight tympanums enhance the neoclassical spirit. A high fieldstone foundation on the east side accommodates the pronounced change in grade.

Frederick V. Hyde House at 56 Pigeon Hill Road (ca.1907, MHC 257, Map #17), described in greater detail in an individual inventory Form B, is an unusual stucco house with a distinctive two-story center pedimented entrance porch, which is open at level one and enclosed with patterned glass windows above. This house also has a notable garage / storage outbuilding built about the same time as the house (MHC 258, Map #18). 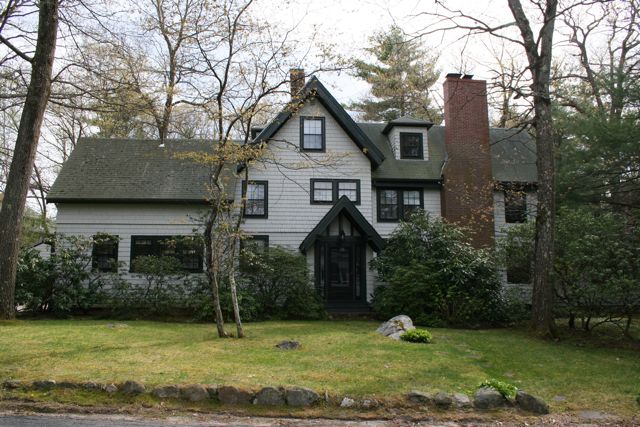 In 1919, architect Alexander Jenney sold his house at 44 Hill Top Road along with one of his two original lots. Jenney retained Lot L and built the house at 46 Hill Top Road (1919, MHC 563, Map #11), a 2-1/2 story shingled Tudor, asymmetrical in plan, with a well-detailed one-story enclosed entrance porch featuring wide overhanging eaves and a simple stick-work design in the tympanum.

The steepness of its gable roof echoes the shape of the roof gable on this section of the house. Windows included 6/6, square, and diamond-paned sash. A large brick wall chimney to the west of the entrance add to visual interest of the front façade. Both 44 and 46 Hill Top feature very large living room fireplaces.

The shingled house is set on a hill and has a high fieldstone foundation and raised first story. Entrance is up 11 steps to a screened porch, which extends across the front and is simply ornamented with 1/2 round columns.

The house has wide overhanging eaves, a hip roof, and a large central hipped dormer in the front and another on the east side. The small one-story, one-car detached garage is probably contemporary with the house.

The next year, the Dutch Colonial at 7 Hill Top Road (ca.1926, MHC 558, Map #3) was constructed on a rise, with a simple entrance porch, heavy pent eaves dividing first and second stories, and window groupings of four and five 6/1 sash, irregularly placed.

The neighboring house at 11 Hill Top Road (1927, MHC 559, Map #4) is also Colonial Revival and has, as its principal design feature, a dramatic round pedimented central entrance porch, supported on two thin columns. This three-bay house has a large addition on the north end with a below grade two-car garage.

38 Hill Top Road (ca.1935, MHC 567, Map #15) is the last of the neighborhood’s handsome Colonial Revival houses, designed by the Boston architectural firm of Kilham, Hopkins and Greeley for Mr. and Mrs. E.Olsen Field. Two gables intersect at right angles, with the enclosed entrance vestibule at the point of intersection. The house has wide clapboards and a green slate roof. The property is landscaped with mature trees and shrubs, especially rhododendrons.