The Case Estates Area can be broken down into four sub-sections separated by roadways and will be discussed in the following order:
MHC form numbers will be given in the next section, where the buildings themselves are discussed. 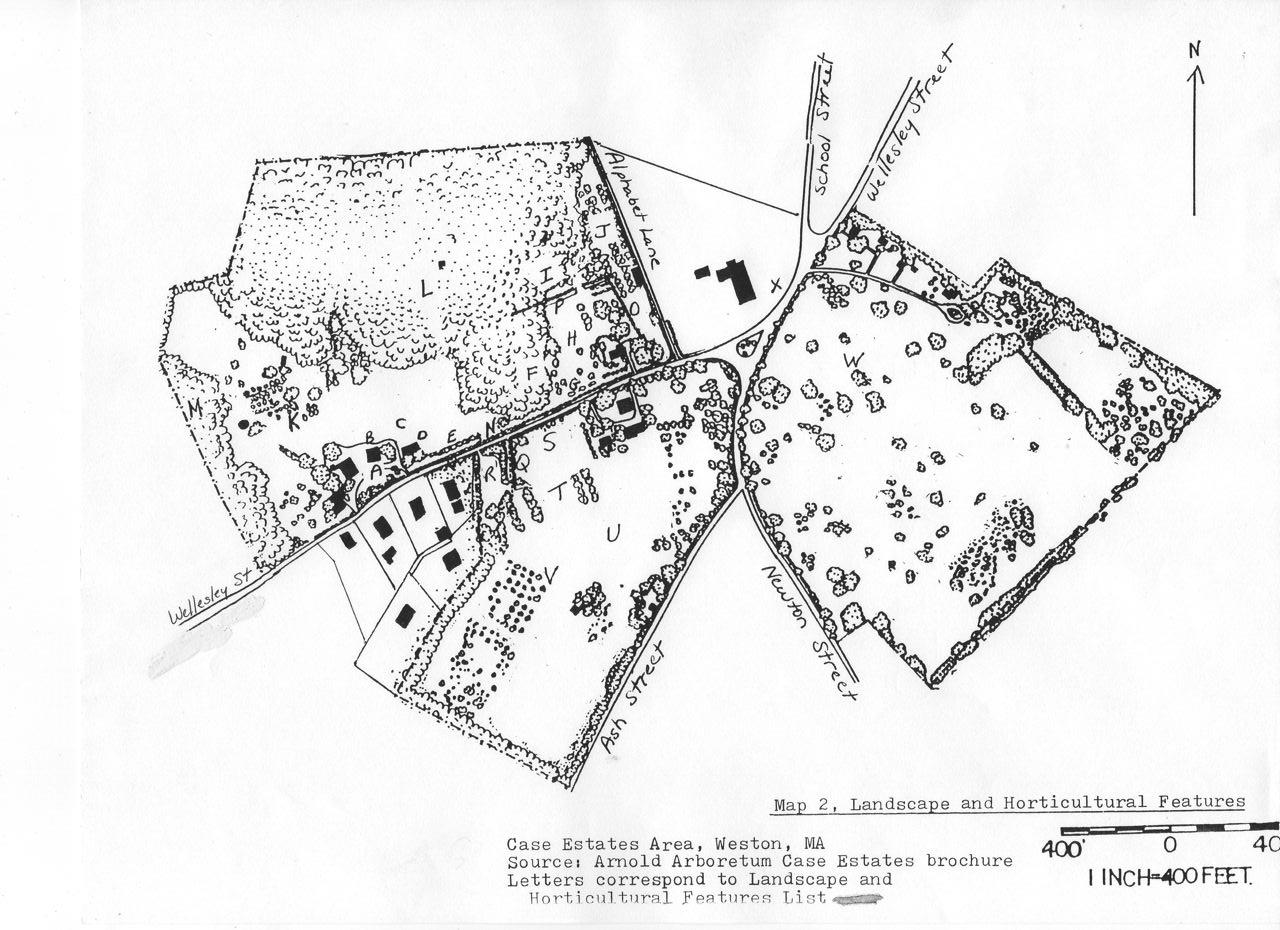 Case Estates Area Layout
The section of the Case Estates Area north of Wellesley Street and west of Alphabet Lane contains the cluster of 4 buildings which have historically formed the operating core of the agricultural and horticultural enterprises located here. Clustered here along Wellesley Street at the west end of the property are 137 Wellesley Street (Map #1), the barn (#2), the schoolhouse (originally called the clubhouse) (#3) and 131 Wellesley Street (#4), all accessible from a paved circular driveway. These 4 buildings are screened from the street by plantings of evergreen and deciduous trees. A fifth building, the Barker House (#7) is located at 101 Wellesley Street approximately 1000 feet east of the main cluster. The cow barn (#8) is located on Alphabet Lane about 300 feet from Wellesley Street. Two small ancillary structures are also located in this north section: a large fieldstone incinerator (#5) and a small concrete block 1950 summer house (#8) bordering the natural woodlands and overlooking the terraced hillside, which forms an outdoor amphitheater.
During the years when the Arboretum was actively managing the Case Estates, this section of the property was used for display areas; and formal landscape elements alternate with more naturalistic features.  In general, formal gardens and display areas are grouped either around the buildings #1-4 or in the area of 101 Wellesley and the cow barn (#7,8), with wooded areas between and behind these 2 center of interest.

Hosta & Fountain Gardens
In the vicinity of buildings #1 - 4 is the hosta garden and the fountain garden (A) next to the schoolhouse, landscaped with terracing and a fountain and including a variety of hosta cultivars and shade tolerant perennials.  Behind the schoolhouse is a perennial teaching garden (B) developed in conjunction with Arnold Arboretum classes beginning in 1988.  This garden is sheltered and framed by evergreens and features a variety of perennials and ornamental grasses and espaliered plants, including euonymus.  To the east of this garden is a general nursery area (C), where plants were grown to be evaluated for winter hardiness.  This area is now planted with a variety of deciduous shrubs such as lilacs, as well as small trees.  To the east of 131 Wellesley is a collection principally of rhododendrons and azaleas (D). 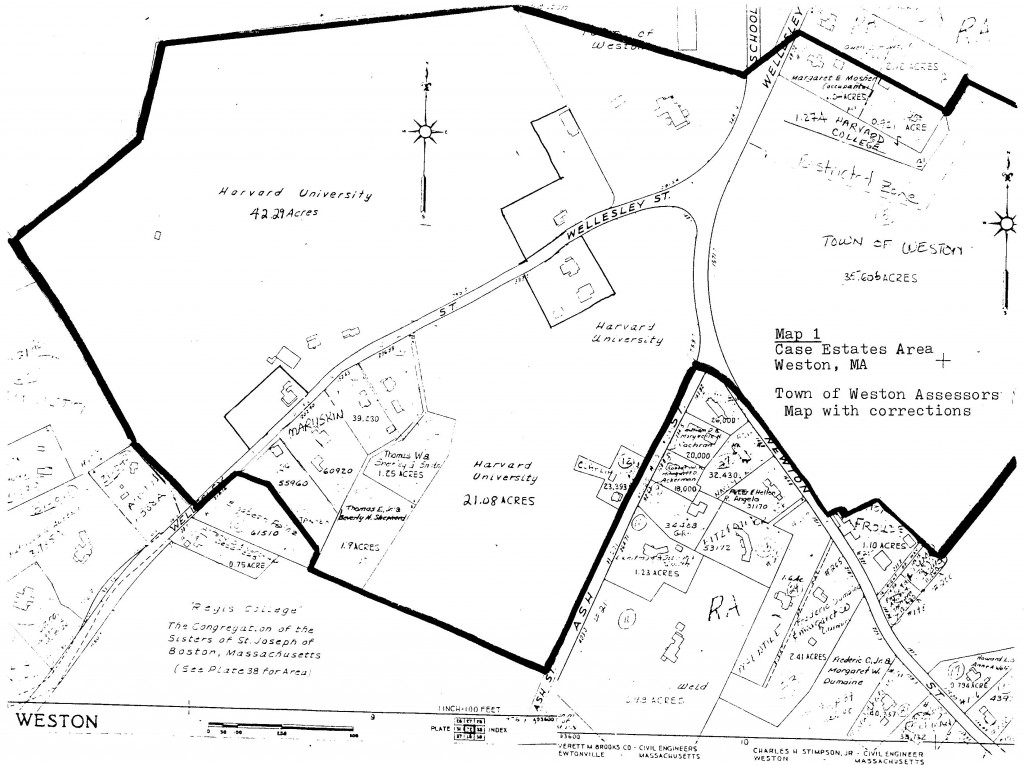 Henrietta Crosby
Extending east along Wellesley Street is a single row of “Henrietta Crosby” crab apples (E) followed by a rhododendron garden planted by Marian Case in 1937, which forms a natural break in the landscape pattern.  This garden has matured into an oak and rhododendron woodland, along the edge of which is a large and mature collection of flame azaleas in pink, cherry red, orange, yellow and white colors.  Nearby, along Wellesley Street, is a more recently planted hedge of yellow and green chamaecy paris evergreens (G) and purple Cotinus. Behind this leafy screen is a lawn (H) with specimen trees, extending back to a high stone wall.  Among the trees located here is a large white oak and a mature Cornus kousa.

Display Garden
Behind the stone wall is the new rhododendron display garden developed in conjunction with the Massachusetts Chapter of the American Rhododendron Society and featuring a large variety of the newer cultivars displaying a range of flower color, blooming season and form (I). Along Alphabet Lane behind the cow barn is an unparalleled display of trees of small stature and narrow form suitable to the smaller lots of suburban Boston. This street tree collection (J) is now 40-45 years old.

In front of the cow barn, extending along the stone wall on Alphabet Lane, are tall grasses and bamboo,that can be seen above the wall from the other side. Several notable small trees are also located here, including a Magnolia kobus and a paper bark maple Acer griseum.

Behind buildings #1-4 is an area of gently rolling terrain and open fields interspersed with a variety of freestanding trees. Near the knoll where the summer house is located is an orchard of flowering spring fruit trees including crab apples and ornamental cherries (K). Behind the orchard, the land is graded into large terraces, and various cultivars of lilacs are planted here. Behind these more formal areas is a large natural woodland consisting mostly of white pines with some black, red, scarlet and white oaks (L).

The northwestern portion of this area abuts conservation land owned by the town of Weston and contains trails which wind through natural woodlands abounding in wildflowers. Colorful red maples dominate a swampy portion of the woodlands. Along the western border of the property is a wetlands area (M).

Stone Walls on the Case Estates Area
Stone walls are used extensively in this section of the property to define edges and for formal landscape purposes. Many of these are classic New England stone walls, some dating to the 18th and 19th century and others built during the early 20th century Hillcrest years. A stone wall runs along Wellesley Street from the west end to the front of the barn. At that point a long row of single large boulders (N), called a hen’s-tooth or balancing wall, continues almost to 101 Wellesley. This wall was built in 1913 from boulders found on site. A high stone retaining wall separates the Barker House from the cow barn area (O). Behind the Barker House is the largest stone wall on the property, said to be the largest free-standing dry wall of native stones in New England (P). Dating from 1913, the wall is about 200 feet long, 10’ high and about 4’ thick and was built for the protection of fruit trees.

Private Properties
Across Wellesley Street, the Case Estates Area includes 8 privately owned houses, as well as a 21-acre portion of undeveloped Case Estates land owned by Harvard’s Arnold Arboretum. Visually, the houses at #102, 132, 134 and 138 Wellesley Street (#25, 21,19,17) and their associated frame outbuildings contribute to the streetscape and complement the architecture of the houses across the street. 226 Ash Street (#29) stands alone along the west side of Ash Street, and 128 and 132 Wellesley Street (23,24) are interior lots with no street frontage. Also located here is a root cellar (#28) or covered basement used for storage of fruits and vegetables in winter. A dirt road enters the 21-acre undeveloped portion of the property from Wellesley Street and extends about 150’ into the center, ending in the open field (Q).

Perennial Garden
The most important formal landscape element located her is a large perennial garden (R). The Arboretum recently removed many of the perennials, leaving behind large curvaceous island beds framed with mature plantings of flowering trees, a variety of evergreen shrubs and the large, slow-growing chamaecyparis cultivars. Also on this side is a collection of fringetrees Chionanthus virginicus, a large shrub or spreading tree, and magnolias (S) and a tree collection grown for the purpose of showing different pruning techniques (T). Alternating with these plantings are open fields previously used as farm fields (U). The soil is prime agricultural soil, the highest class of agricultural land. South of the fields is an apple orchard (V). Some more exotic fruit trees such as beech plums have also been planted here, as well as Chinese chestnuts.

East of Wellesley Street is a 35-acre field now owned by the Town of Weston. Adjacent to the field and under separate ownership are 2 former Case staff member’s houses (#11,15) with frame outbuildings (#12,13,14) The land on which these houses are sited is not visually divided from the town field, and the buildings and land present an unspoiled rural landscape. The town field is an aesthetically diverse open space comprised of gently rolling hills, cultivated fields, woodlands, and magnificent specimens of mature trees, some of which appear to date back to the 19th century estate era. The soil here is prime agricultural soil, the highest class of agricultural land. About 11 acres of the field is currently cultivated by a non-profit organization, Land’s Sake, which uses it to grow flowers, vegetables, raspberries and strawberries. The only structure on the 35-acre field is the open stand where produce is sold (W).

Case House
Across from the town field is the Case House (“Rocklawn” )(#10), which is set back from the intersection of Wellesley and Newton Streets on a slight rise, with a lawn and mature trees in front. The Case House is located on the edge of a 75-acre parcel of town land once part of the Case family holdings and now the location of 3 public schools, the town pool, Alphabet Park, and numerous playing fields. For the purposes of this area form, only the 4 acres immediately surrounding the Case House is included. This includes the large boulder (X) from which the estate name “Rocklawn” was derived. It also includes the small outbuilding at rear (#9), which was once a carriage shed attached to a large frame barn, which burned in 1947. The inclusion of the Case House and environs maintains the aesthetic and historic connection between the main estate house and the land across the street, which was originally part of the estate.
Government Websites by CivicPlus®
[]