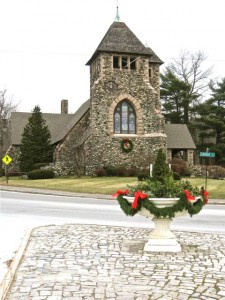 Source
The following information is excerpted from the 1983 National Register Nomination Form. It has been edited by Pamela W. Fox, and additions and changes are noted within brackets [ ]. Most photographs are by Fox and date between about 2005-2011.

Present & Original Physical Appearance
The Boston Post Road District in Weston runs east to west for 3 1/2 miles from the Waltham line to the Wayland line, dividing the town into 2 nearly equal parts. The district encompasses the historic town center of Weston, as well as the best preserved section of the state’s major 18th century east-west connector. Exhibiting residential, commercial, and public buildings that date from the 18th through 20th centuries, the district retains a rural atmosphere. Totaling approximately 760 acres in size, the Boston Post Road District contains 170 major buildings and many barns and outbuildings.

Landscape
Upon entering Weston from the east on the Post Road, the landscape is dominated by the interchange ramps for Route 128 (not included). Past this, the gently curving Post Road becomes a tree-shaded highway with fine homes well spaced and set back from the street. On either side of the road the land is gently rolling, with a slight drop-off on the north to the valley of Three Mile Brook. Approximately 1/2 mile westward into the district, the roadway splits to include Crescent Street (the old Post Road) and an 1855 by-pass which is currently termed the Post Road. In the middle third of the district, a 1931 by-pass circumvents the center of town in a southerly direction. Upon leaving Weston on the west, the character of the road changes dramatically to commercial strip development.

Residential & Commercial Areas
At either end, the Boston Post Road District is residential in character. Its rural atmosphere is perhaps more pronounced in the western section. In the middle (north of the 1931 by-pass) is Weston’s town center, which is dominated by the Weston Town House and extensive Town Green. The center consists of 2 other public buildings, an 18th century tavern, 3 churches, a few 1- and 2-story commercial buildings, and several residences converted to business use.

Boston Post Road
The significance of the Boston Post Road arose in prehistoric times, when the main native trail from the Boston basin to the Connecticut River Valley followed this axis. As a colonial period highway, the Post Road continued as a primary east-west connector and was the focus of settlement; high-style Georgian features distinguish this era of building. During the early 19th century, limited new construction and remodeling occurred on the Post Road. The late 19th and early 20th centuries were generally even less active, although almost all of the area’s public buildings - executed in the late Victorian and Colonial Revival styles- date from this period.

The district thus contains examples of architecture extending over a period of 250 years. Within the district are public buildings, residences, commercial buildings, barns, stables, outbuildings, 2 schools, 2 1850s school buildings converted into residences, 5 churches, a former church that is now a residence, four parks, 2 old cemeteries, and 2 18th century taverns.
Structure Details
Most structures are 2 to 2 1/2 stories in height and of wood frame construction. In general, buildings and grounds are well preserved and well maintained. The district has no out-of-scale intrusions. Recent buildings are, for the most part, one- or 2-story residences of Colonial or Georgian Revival styles which harmonize with the historic structures. 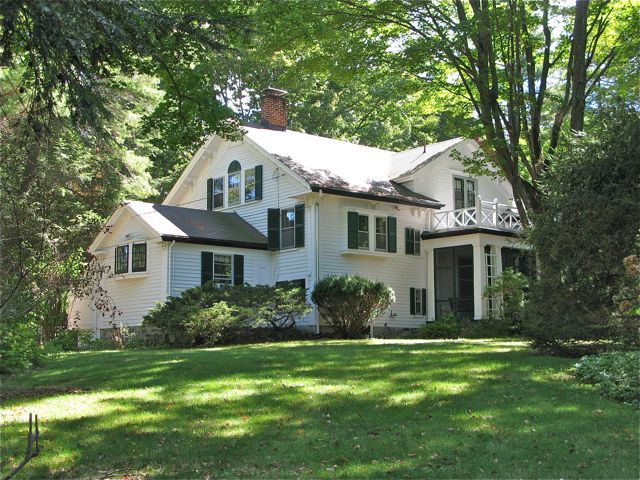 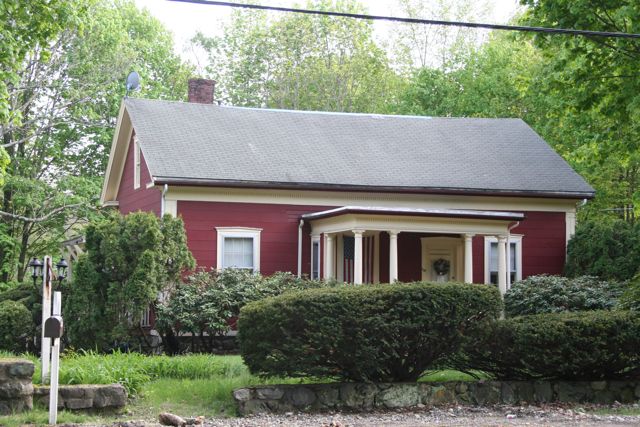 Georgian Style
The Georgian style in the Post Road District is typically represented in the 2-story, 5-bay structure with gable, hip, or gambreled roof, interior chimneys, and a rear ell. The Golden Ball Tavern, 1768, [662 Boston Post Road] is probably the district’s best example of this style; listed in the Register in 1972, the building has a double hip roof, a classically framed doorway with fluted pilasters and transom, and 12/12 sash windows. More typical designs in this style include the Josiah Smith Tavern, 1757 [358 Boston Post Road] and the Artemus Ward House, 1785 [543 Boston Post Road]. 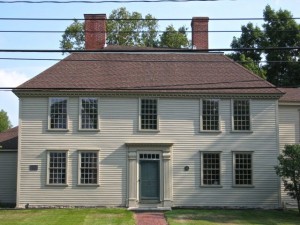 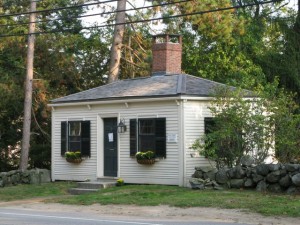 Historical Revival Styles
On the other hand, historical revival styles are prevalent in the Post Road district. These multifarious buildings are generally 2 and 2 1/2 stories in height, with hip or ridge roofs, often an academic entrance, and a plethora of wings, porches, pavilions, and dormers. Wood shingles are frequently used for wall sheathing. Eight public buildings demonstrate a variety of academic designs from medieval to Colonial Revival. All of these are constructed of masonry. Domestic structures, largely following Colonial Revival influences, range from the compact dignity of the Albert Horatio Hews House, 1880 [Stick style with Colonial Revival porch, 699 Boston Post Road] to the exuberant Mrs. Francis Sparhawk Sears House, 1919 [293 Boston Post Road]. 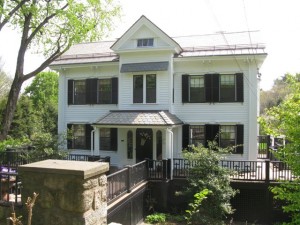 The fine Italianate house at 338 Boston Post Road was built in the mid-19th century for Dr. Otis Hunt and was later home to Rev. Dr. Edmund Hamilton Sears, minister at First Parish Church. His son Horace moved it across the street in 1907.
Minutes / Agendas
Stay Informed
Weston Maps Online