The Boston Post Road District is important on both a local and state level. First, it is the historic center of Weston, which thrived on the travelers’ economy of the 18th and early 19th centuries. Second, Weston contains the state’s best preserved segment of this major east-west connector as it appeared in that era. The district contains important examples of architecture from that period as well as a significant collection of buildings from a much later period of suburbanization. The Post Road District retains integrity of design, materials, workmanship, setting, and location; it meets criteria A and C of the National Register.

Incorporation
First settled in the mid-17th century, the Town of Weston was incorporated in 1713. The area now comprising Weston was originally part of Watertown, known as the “Farmer’s Precinct” or “Watertown Farms.” The remoteness of the meetinghouse in Watertown led the settlers in 1665 to request a church of their own. The first church building was begun in 1695 and completed in 1710; the present church is the fourth on the site.

Economy
During the colonial period, Weston’s economy was based primarily on agriculture and grazing, serviced by a commercial center which emerged around the meetinghouse and spread along the Post Road. This center included a dry goods store, a tannery/ shoemaking shop, a redware pottery, some doctors, and probably lawyers as well. Stores most likely occupied part of houses during this period, while small shops were located in outbuildings.

Development
The Boston Post Road, which was the primary route to New York for over a century, was a catalyst for development here. Originally an Indian trail, the first Post Rider traversed this road in 1673. In 1873 the first stagecoach traveled the road. Weston boasted four to five taverns within a mile and a half of each other along the Post Road, but only two are known to survive: Josiah Smith’s Tavern, 1757, [358 Boston Post Road], and the Golden Ball Tavern, 1768, [662 Boston Post Road].
Weston Tea Party
The Post Road in Weston was the scene of much activity before and during the Revolution. In 1774, a group of irate citizens organized the “Weston Tea Party,” painting themselves like Indians and raiding the Golden Ball Tavern, bent on capturing its Tory landlord. Fortunately, he was out of town at the time, but a great deal of windows and crockery was smashed and the liquor supply seized.

Historical Commemoration
A tablet in Lamson Park [adjacent to Town Hall on the west] commemorates Colonel Lamson and the 103 Weston men who gathered nearby to march to Lexington on April 19th, 1775. Also passing through Weston over the Post Road were the artillery brought from Fort Ticonderoga to relieve the siege of Boston, prisoners from the battles of Bennington and Saratoga, Burgoyne’s defeated army, General Knox, and Lieutenant Colonel Paul Revere (who mentioned stopping at the Golden Ball Tavern for breakfast.)

Turnpikes & Industry
Although the Post Road continued to carry as many as 40 stagecoaches a week by 1830, new turnpikes located north and south of Weston reduced the importance of the Post Road early in the 19th century. Commercial stagnation gradually set in, with cottage industries and crafts sustaining the area. Foremost among these were the Sibley Machine Shop behind the Nathaniel Sibley House [104 Boston Post Road] and the Shattuck school desk factory behind the Luther Harrington House [21 Crescent St] Of special note is the pottery established by Abraham Hews in 1768 that operated for over a century in Weston- first, probably, near the Abraham Hews House [510 Boston Post Road] and then at the Abraham Hews Jr. House [651 Boston Post Road].
Suburbanization
The later 19th century saw increasing development of the Post Road District, although suburbanization was the only new trend that directly affected or related to the district. After the middle of the century, Weston was served by two railroads running through the town, with one of a total of six stations located in the town center. The resulting ease of transportation between Boston and Weston caused many large country homes to be built throughout the district beginning about 1870. 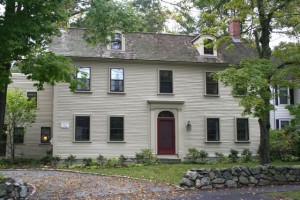 Population & Development Increase
Population increased steadily during the late 19th and early 20th centuries, and both elaborate and modest suburban homes clustered around the Post Road. Development peaked around the turn of this century with the construction of virtually all of the district’s institutional buildings. These include the town hall, four churches, a library, and fire station, all designed by Boston architects.
Abraham Hews Jr. House at 651 Boston Post Road. The Hews Pottery was located in the immediate area.
20th Century
The later 20th century has been dominated by Boston-oriented suburbanization in the Post Road District as well as Weston as a whole. Several houses here have been converted to commercial use, but building activity is otherwise characterized by residential infill, especially in the western part of the district. Due to the foresight of its citizens in establishing parks and acquiring conservation land, however, the district still retains its rural atmosphere. 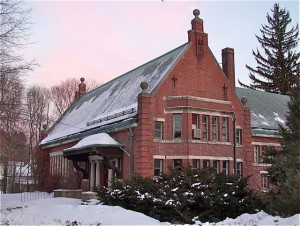 Residential Styles
The architecture of the district reflects this social heterogeneity as well as the various trends of historical development. The best-developed styles found along the Post Road are from the Georgian and Federal Periods. Especially notable is the district’s collection of intact taverns and law offices. The Victorian residential styles are prettily designed but minor in general significance. The large scale but aesthetically modest institutional buildings from the turn of the century are the second most impressive category of buildings. A number of builders and architects are known to have worked here, beginning with housewrights Jeduthan Baldwin [22 Church St] and John Paradee [28 School St] and extending to the local architect Samuel Mead [293 and 770 Boston Post Road], noted Boston architects such as Peabody and Stearns [First Parish Church, 349 Boston Post Road], Joseph Chandler [6 Conant Road addition, Sears estate outbuilding at 335 Boston Post Road], and several lesser known regional architects (Fox, Jenny and Gale, Bigelow and Wadsworth, Clifford Albright).
Government Websites by CivicPlus®
[]