The Church Street/Coburn Area is the best-preserved example in Weston of a rural family farming enclave in which family members were economically interdependent. For many generations beginning in the early 19th century and continuing until World War I, members of the Coburn family farmed this area and cooperated in seasonal tasks such as plowing fields, taking produce to market, driving cattle to summer pastures, and procuring coal and ice.

Although the Coburns were not the first family to live in this area, Jonas Coburn purchased his 122-acre farm at the turn of the 19th century, and all subsequent buildings were built by family members. The character of the area has been shaped by the family, which continues to live here to the present day. The Coburns have also been prominent in Weston business and civic affairs. One member of the family, Arthur L.Coburn, served as president of the Hook and Hastings Co. organ factory from 1916 to 1931. 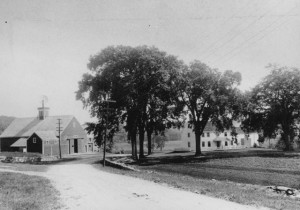 In 1801, the house and property was sold to Jonas Coburn for $4,400, and it has been owned by the Coburn family ever since. The 1801 purchase included 120 acres extending almost to the center of town and westward as far as today’s Fairview and Pinecroft Roads. Jonas’s son, Isaac (1811-1879), and grandson, Arthur Leslie Coburn (1860-1931), owned the house in successive generations, followed by Arthur Coburn’s daughter Anne Cutter Coburn. The Coburn Barn directly across the street at 154 Church Street (Map #2, MHC 12) dates from 1841.

The Coburn Family
Until 1875, the Coburn family were all farmers, and even after that members of the family earned their living from the land. They are described in Once Upon a Pung as “a closely knit family of many cousins and brothers …(who) enjoyed a system of communal living which was somewhat unique, pooling their resources, and operating as a unit. Different families took turns carting milk, fruit and vegetables to Faneuil Hall in Boston and every spring the job of driving young heifers to pasture in Stow would be undertaken by members of different families. Coal requirements for the winter were specified in advance, and a wholesale order would be placed through Hook and Hastings Organ Factory- Mrs. Hastings being one of the family. Ice was cut in a pond….and stored under layers of sawdust in a commonly owned icehouse. In winter, driveways were plowed by those who had horses and those who had none would make up for this service in some way or other…” The family cranberry bog was located near Hastings Station. This way of life continued until World War I.
Edward Coburn House
The 2nd Coburn house in the Church Street / Coburn Area was the Edward Coburn House at 171 Church Street (1841, Map #4, MHC 10). Edward Coburn was reportedly the town’s 1st wholesale butcher. He also served as State Representative in 1875 and Town Selectman for 18 years between 1855 and 1881. Behind the house are 5 ponds; and in early times, a windmill pumped water from these ponds to a high hill behind the house, where a pipe carried water by gravity into a cellar tank from which it was pumped into the kitchen. The present stable was reportedly preceded by 2 larger barns, the 1st built in 1841 (destroyed by fire 1889) and its successor, which burned in 1955. 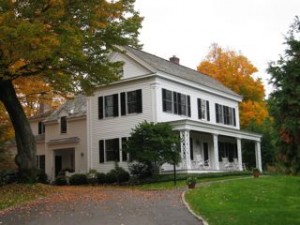 Edward Coburn built the house at 179 Church Street (1863, Map #6, MHC 11) for Mr. Fran Hall, who rented it for many years. Mr. Hall owned and operated a shoddy mill (no longer extant) alongside the road at Stony Brook. The house was subsequently owned and occupied by Albert E. Coburn, 2nd son of Edward, on whose death it was leased to an employee at the organ factory. In 1922 it was purchased by Raymond Coburn, grandson of Edward Coburn, who lived there for many years.

In 1897, Arthur Leslie Coburn, grandson of Jonas Coburn and owner of the family homestead at 153 Church Street, gave up farming and joined the Hook and Hastings organ manufacturing company. He served 1st as Secretary of the Corporation and Superintendent and, after the death of owner Francis H.Hastings in 1916, as president. The nationally known company, located nearby at North Avenue and Viles Street, manufactured organs for churches all over the country (see Kendal Green Area Form). Arthur Leslie Coburn was one of 8 children; his siblings included Anna Cutter Coburn (1853-1950), who was married to Francis Hastings.

Arthur Coburn was married to Helen Haines, and the couple had 3 children: Anne Cutter (b.1900), Arthur Leslie (b.1903) and Mary Chapman (b.1908). He built his own house nearby on Webster Road (since destroyed) in 1902. Between 1902 and 1935, when his widow and daughter moved back in, the house at 153 Church Street was occupied by tenants. Coburn built the Coburn Cottage at 154 Church Street (Map #1, MHC 12) in 1902 for his hired man and family. [demolished] All farming operations ceased in the 1920’s but the buildings were maintained and the estate retained its rural appearance.

Part of the Coburn land on the north side of Church Street was used for the Weston Golf Club, organized in 1894 and continuing in this location until 1917. The clubhouse was several hundred yards behind the Coburn Barn, reached by a driveway from Church Street. In 1974, the Coburn meadow was given to the Town of Weston as conservation land.

In 1997, at the May Town Meeting, the Town of Weston voted to purchase the property at 153 Church Street. The meadow was split off from the house lot and put into conservation land. The house, with about 1 acre of land, will be sold in the spring of 1999 with preservation restrictions protecting the exterior of the house and character of the landscape and allowing for expansion only to the east, where a driveway and garage can be built.

For the full text and appendices of the area form, see Church Street/Coburn Area Form. 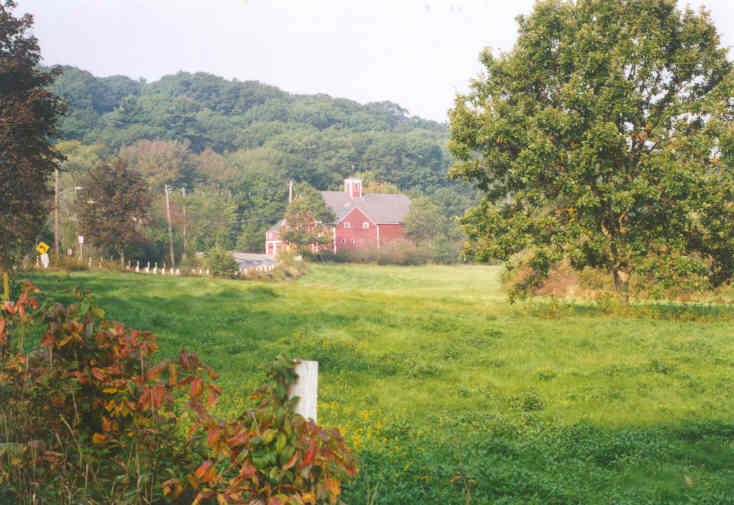