The Love Lane Area exemplifies a major shift in land use which took place in Weston in the late 19th and early 20th century, as family farms were bought by wealthy city dwellers and turned into summer estates and “gentlemen’s farms.” By 1910, all the land from Claridge Drive south, as well as the property at #85, was part of 4 estates belonging to the Kettle, Freeman, Dickson and Nolte families.

What is unusual about the area is that substantial elements from all 4 of these estates remain today. The area retains its early 20th century character, especially south of Claridge Drive, where the built environment is substantially unchanged since 1931 and large parcels of land are maintained as hay fields and estate lawns or left undisturbed as natural woodland. Included within the Love Lane Area are examples of the varying ways that estates were operated in Weston. Brenton H. Dickson Jr. built his own year-round house, commuted to the city, and used an existing farmhouse for staff housing. City resident George Nolte purchased land and built a dairy farm operated by a resident caretaker. The Freemans and probably the Kettles used their estates in the summer only.
Historical Estates
Moses Harrington House
Love Lane, which was known as Elm Street until the early 20th century, appears on the earliest Weston maps. The angle in the road is thought to reflect the “squadron lines” marking the original land divisions in Weston. Of the 3 houses shown on the 1795 map, only the Moses Harrington House at 109 Highland Street (ca. 1757, Map #1, MHC 277) remains today.

Moses Harrington was a farmer who purchased the land in 1756. In 1768, he was taxed for a relatively small farm including 3 oxen, 2 cows, 5 acres of pasturage, 4 acres of tillage land, and 6 acres of mowing land. A 2nd Colonial-period house was located at the southwest corner of Highland Street until it burned in 1897.

During the Revolutionary War period, this house belonged to Jonas Sanderson, who was keeper of the military signal beacon light on Sanderson Hill across Highland Street. His descendants continued to live in the area into the early 20th century. The 18th century Goddard house once located at 46 Love Lane is not the present house on that site, as mistakenly noted on 250th anniversary maps.

Sanderson / Dickson House
Between 1850 and 1856, George Sanderson, grandson of Jonas, built a handsome Greek Revival dwelling now incorporated within the Sanderson / Dickson House at 26 Love Lane (Map #28, MHC 310). Sanderson was a farmer who is listed in the 1893 directory as specializing in “small fruits.” That same directory lists E.E. and W.B. Sanderson on Elm Street as “florists.” They were probably the builders of the 5 large greenhouses, parts of which remained on the property into the 20th century. George Sanderson’s unmarried daughter Lizzie owned the house from 1889 to 1905, when it was sold to Brenton H. Dickson, Jr., a Boston businessman who was by then a major land owner in the area.

George Pickard House
Also dating from the mid-19th century is the George Pickard House at 46 Love Lane (ca. 1857-62,Map #27, MHC 301) [demolished]. The house does not appear on the 1857 map but is shown in 1866. The original owner appears to have been George Pickard (or Pichard), who purchased 13+ acres in 1856 from George Sanderson. He is described in the 1856 deed as a “gentleman.” Pickard died about 1862, and in the 1863 deed of sale, he is referred to as a Boston policeman. Tax records from 1864 still describe the property as “the Pickard Place,” then owned by James Hobby, an engineer.

The property changed hands numerous times before it was sold in 1910 to James G. Freeman and became the “farmhouse” for his estate at 55 Love Lane.

Kettle Barn & Carriage House
The 1st estate in the Love Lane Area was established by Lorenzo N. Kettle, who built his mansion house at 770 Boston Post Road, just outside the area, in 1892, from designs by Samuel Mead. Kettle is listed in the 1893 directory as a wool merchant in Boston. He is thought to have maintained a house on Beacon Street as well. His land extended all the way to Love Lane and included what is now 85 Love Lane and all of the Claridge Drive development.

The Kettle Barn (ca.1892, Map #16) and Carriage House (ca.1910, Map #17) are located at 85 Love Lane [demolished]. The property was operated as a gentleman’s farm until after World War II. Francis P.Kirk, who owned the 45-acre property beginning in 1938, sold produce from the apple orchards under the name “Stony Ridge.”

George Nolte House
By the turn of the century, Weston was being heralded in a newspaper article as "the Lenox of the East." As in other areas of town, family farms on Love Lane were being purchased by city dwellers attracted to this “quiet, retired (and yet convenient) country town of residence of the 1st class.” City residents would come to Weston for Sunday picnics.

According to Brenton H. Dickson’s Random Recollections, 1 such well-to-do picnicker, George Nolte, greatly admired the old Sanderson house at the corner of Highland Street and kept trying to purchase it. In 1897 the house caught fire and burned to the ground. Nolte took the train immediately from Boston and agreed to purchase the 70 acres on the spot. Within the next few years, Nolte built a dairy farm on the property, with a caretaker’s house, large barn, outbuildings, a windmill, and its own water supply. In 1902, he was taxed for 3 horses, 12 cows, 1 bull, and 130 fowls. 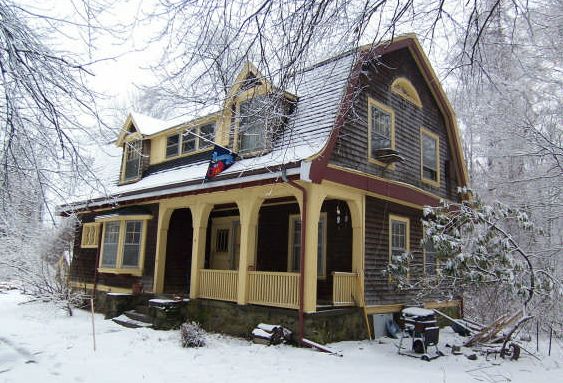 The Shingle Style George Nolte House remains at 16 Love Lane (ca.1898, Map #29), along with a small matching storage shed (ca.1898, Map #30). During the early 20th century, the farm was run by the caretaker, George Welcome, and the Noltes visited occasionally, staying at a camp in the woods nearby. Nolte is said to have been in the candy business. By 1915, Nolte is listed in the town directory as living on the property. During the Depression, the farm was closed and Nolte used the house as a summer place. It remained in the Nolte family until about 1980, when it was sold by the widow of his son, George.

Ivy Abbey & Life on Love Lane
In 1899, Brenton H. Dickson, Jr. purchased 22 acres across Love Lane at the corner of Highland. Two years later, he and his new bride moved into their new Shingle Style house, “Ivy Abbey” (125 Highland Street, Map #3, MHC 272), designed by local architect A.J. Russell. Dickson Jr. worked with his father, a wealthy businessman, as a cotton broker in Boston, procuring Southern cotton for the mills of the northeast.

Life on Love Lane in the early decades of the 20th century has been described by Brenton H. Dickson III in Random Recollections. Love Lane was a remote, isolated section of town, and Dickson Jr. traveled 20 minutes by carriage to Weston Station. No other train commuter lived so far away from the station.

Dickson Jr. ran his estate as a gentleman’s farm which raised food mainly for consumption of family and staff. Estate farm workers raised vegetables, had an orchard with apple and pear trees, and kept 2 cows, a few pigs, poultry and guinea hens.

Mrs. Dickson’s life revolved around horses, which she kept in the large barn. Family errands and shopping were done in Boston, and the family began using the automobile for these trips beginning in 1912.

The house was expanded twice to accommodate the 7 Dickson children, one of whom, Edward Dickson, still lives here and has continued the family tradition of public service.
26 Love Lane
In 1905 and 1907, Dickson Jr. also purchased the Sanderson House and farmland at 26 Love Lane. He apparently intended the property to be used a summer home for his parents, who lived in Boston. Dickson Sr. fixed up and furnished the farmhouse 1 year but did not enjoy summering there, and in subsequent years the house was occupied by estate staff. In 1931 it was substantially enlarged and remodeled as a year-round home for Brenton H. Dickson III and his bride of a few years, Helen Paine Dickson.

Dickson Jr. influenced the name change from Elm Street to Love Lane during the early 20th century. These 2 street names had been used alternately from the 1890’s to the 1920’s, with Mr. Dickson expressing his preference for Love Lane by removing the town’s Elm Street signs and storing them in his basement.

Freeman / Paine House
The 4th Love Lane estate was established by James G. Freeman, a lawyer who purchased his 1st land here in 1891. He continued buying land and eventually owned 7 acres at 55 Love Lane and also the house and 32 acres at #46. The Freeman / Paine House at 55 Love Lane (ca.1903,1908,1911,1991, Map #11, MHC 269) was designed by the well-known Boston architectural firm of Fehmer and Page in 1903 as a small summer house with 3 rooms on the 1st floor and was substantially altered and enlarged over the next decade to its present Shingle Style appearance.

Freeman was married to Caroline Case, sister of Marian Case, who established Hillcrest Farms on what is now called the Case Estates land (see 89 Wellesley Street and also Case Estates Area Form E). The Case family interest in horticulture is reflected in the landscape plan for 55 Love Lane, said to have been drawn in 1901 by a student of Frederick Law Olmsted. The Freemans used the house only in the summer. On the property were barns and greenhouses which have not survived.

In 1913, after the death of her husband, Caroline Freeman sold the estate to her sister Louisa, who held it until the sale to the Paine Estate in 1920. The property was bought by the Paine trustees and occupied by Georgina Paine Fisher (1899-1989), who lived there as her principal residence. (For further information on the Paine family, see form for 118 Chestnut Street.) Her 1st husband, Richard Fisher, was a forester who was head of the Harvard school of forestry in Petersham. Her 2nd husband, Llewellyn Howland, was a writer. After Mrs. Howland’s death in 1989, the house at 55 Love Lane was sold but the farmhouse at #46, always occupied by staff, and the adjacent 32 acres were retained by the Paine Estate.

Ida White House
Two houses were also built at the north end of the street around the turn of the century. The Ida White House at 106 Love Lane (ca.1898, Map #21) is thought to have been built shortly after White bought the 8 1/2 acres at the corner of Love Lane and Boston Post Road in 1896. From 1913 to 1966, the house was owned by Arthur Hunt, who operated the Golden Soap Company, which manufactured soap from the fats in garbage. Some of the rendering of fats was done in vats in the barn (Map #22) until the 1930’s.

Williamson / Farlow House
The Williamson / Farlow House at 98 Love Lane (1904-5, Map #23, MHC 267) was completed in 1905 by Sarah Williamson, who bought the land in 1902. The design has been attributed to Joseph Chandler (1864-1945), a resident of Wellesley who acquired a reputation as an authority on Colonial architecture and was identified with the restoration of historical landmarks including the Paul Revere house, the old Corner Book Store in Boston, and the House of Seven Gables. Some of the woodwork at 98 Love Lane is thought to be from an 18th century house.

Between 1909 and 1936, the house was owned by a lawyer and cotton manufacturer, John S. Farlow, who hired architect Samuel Mead to design a major addition. 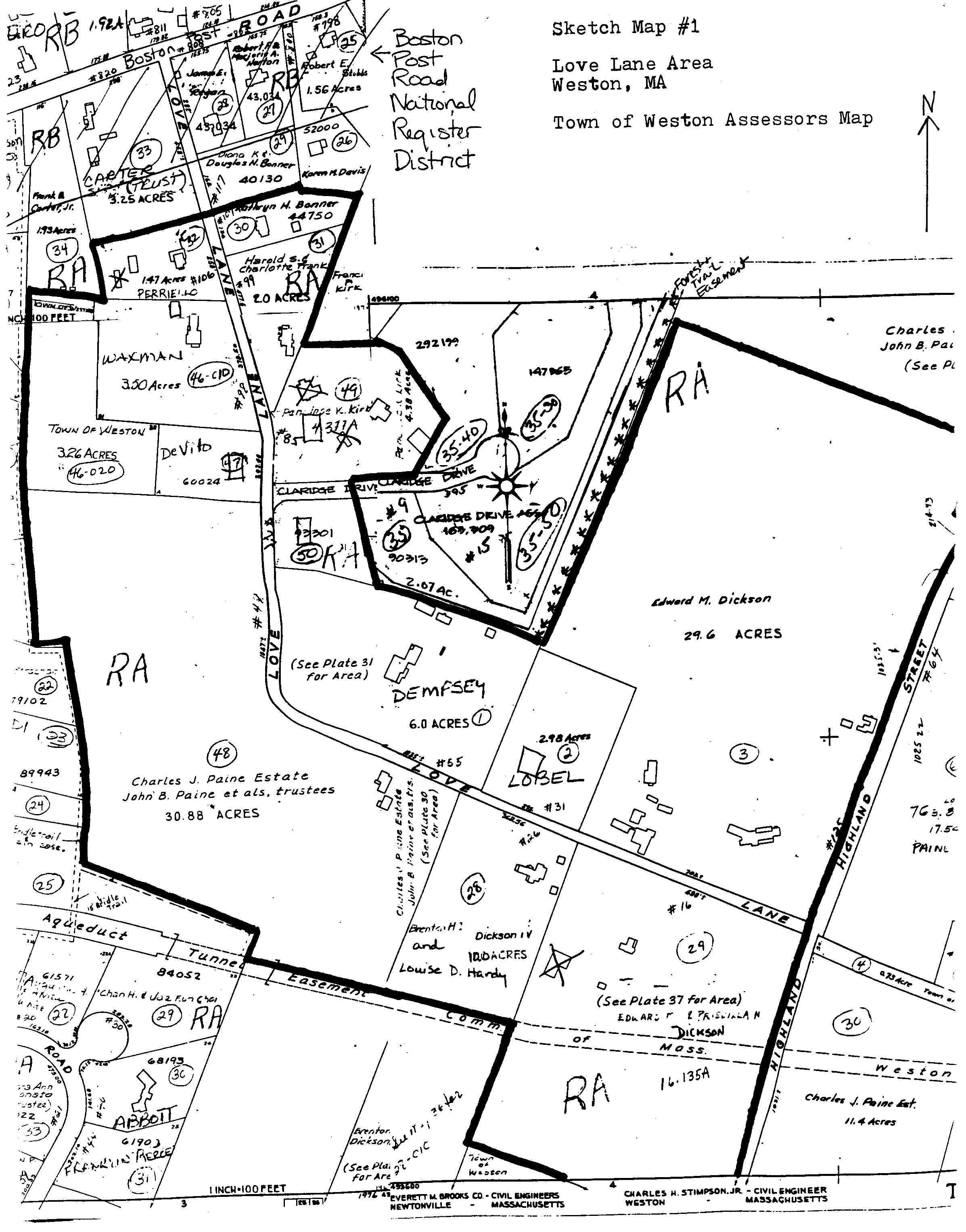