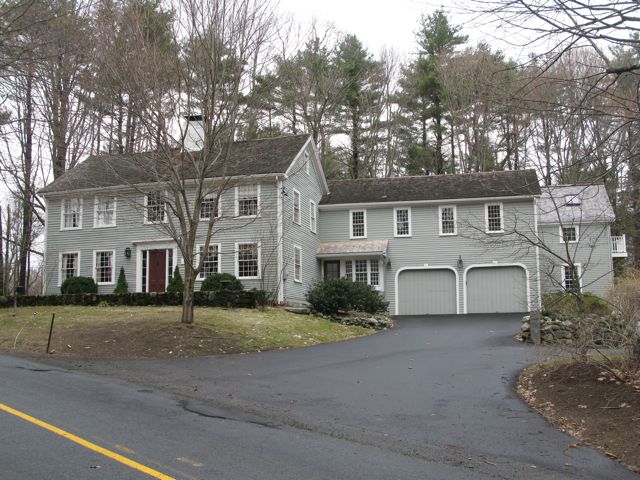 Description
Sudbury Road, one of Weston’s officially designated Scenic Roads, is a narrow winding country road in a remote northwest corner of the town. The quarter-mile stretch described in this area form encompasses over 40 acres, including two parcels of town conservation land fronting on Sudbury Road; in addition, large tracts of conservation land are located behind many of these properties.

Landscape
The large amount of open space in relation to the number of houses gives the area is distinctive rural character. The beauty of the landscape, which has largely avoided formal, manicured treatment, is enhanced by the gently rolling topography, the pond between #33 and #45, the many mature specimen trees, the use of split rail and picket fences, and the stone walls and stone retaining walls which line most of the road.

Houses
Within the area are 11 houses, only 9 of which can be seen from the road. Of those that can be seen from the road, 4 are well-preserved Colonial and Federal side-gable clapboard houses which are sited close to the road and set the tone of the area, giving it a sense of being part of the past. All four of these houses are oriented facing south, with few houses between to intrude on their sense of history. Together they demonstrate the evolution of the traditional New England farmhouse during the Colonial and Federal periods. On the opposite side of the street are two pre-World War II, International Style houses that are among Weston’s few examples of this relatively uncommon style. The two houses provide an interesting visual and ideological contrast to the early houses across the street.
William Smith House
The earliest house in the area, the William Smith House at 111 Sudbury Road (ca.1715, MHC 217, Map #8), is one of the oldest houses in Weston. It is thought that the original house probably consisted of the left three bays, about half the size of the present house. This was typical of the earliest houses in Weston, which were generally “one over one” in plan. At a later date, the size of the house was increased to the traditional five bays. The sixth bay, the 8 1/2 feet at the east end of the house-is thought to represent still another addition, which makes the house slightly asymmetrical. All the additions are thought to date before 1757. Windows have simple surrounds and 6/9 sash. The house now has two large brick chimneys. 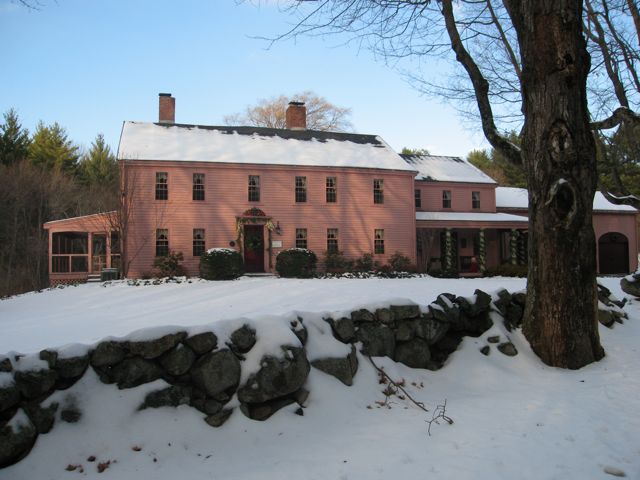 45 Sudbury Road
45 Sudbury Road (ca.1731, MHC 214, Map #2), a slightly later house in date, represents the next stage in Colonial building- the symmetrical, five-bay, central chimney house with a “two over two” plan consisting of two front parlors, a rear keeping room, and two bedrooms above. The house retains its original turn-around stair and the early Georgian woodwork and bolection fireplace molding in the southeast parlor. Windows are 8/12 with simple surrounds.
63 Sudbury Road
63 Sudbury Road (ca.1803, MHC 215, Map #4) is a later, Federal-style version of #45, little changed over the intervening 60 years. The 2 1/2 story, side-gable house measures almost the same (38’, compared to 36’ across at #45) and also has a five-bay facade with a central entrance, central chimney, turn-around stair and “two over two” interior plan. The change from the earlier Georgian style to Federal is evident in interior details such as the fireplace surrounds.

Barn
Across the road from #63 is a small barn (MHC 617, Map #11) of unknown date which provides a visual balance to the house itself. This one-story, side gable, shingled structure is set with the gable end to the street and vehicle openings to the east side. 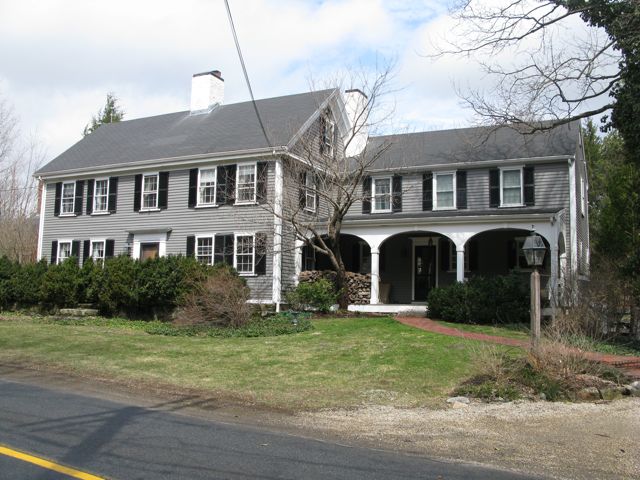 Samuel Smith, Jr. House
The Samuel Smith, Jr. House at 89 Sudbury Road (ca.1826, MHC 216, Map #6) is a handsome, 2 1/2 story, Federal style, side-gable clapboard house which was “updated” later in the century with an Italianate-style central peaked gable and other Italianate decorative features. The house originally had a “two over two,” center hall plan, which represented an evolution over the central chimney plan of the previous century. The interior was changed during the remodeling phase and new features added such as an Italianate-style front door, stair balustrade and newel post, as well as the round-headed window in the new gable.
New Houses in the 1930s
No new houses were built within the defined Sudbury Road Area until the 1930s, when the houses at 74 Sudbury Road (ca.1934, MHC 618, Map #10) and 102 Sudbury Road (ca.1940, MHC 617, Map #9) were constructed using the International Style, which is characterized by its flat roof, unornamented wall surfaces and asymmetrical massing. Both houses were designed by architect Ned Goodell. Both avoid all references to the traditional form of houses across the street. #74, the earlier of the two, combines box forms with large banks of glass windows to create a house which was highly unusual in its day. The house was originally painted in many shades of green, arranged in gradations with the darkest at the bottom to lightest at the top to blend in with the landscape. The door was originally painted bright red. Presently the house is painted white. #102, also highly unusual for Weston, uses a series of rectangular and polygonal blocks with vertical banks of windows to create a house that is like a piece of sculpture. 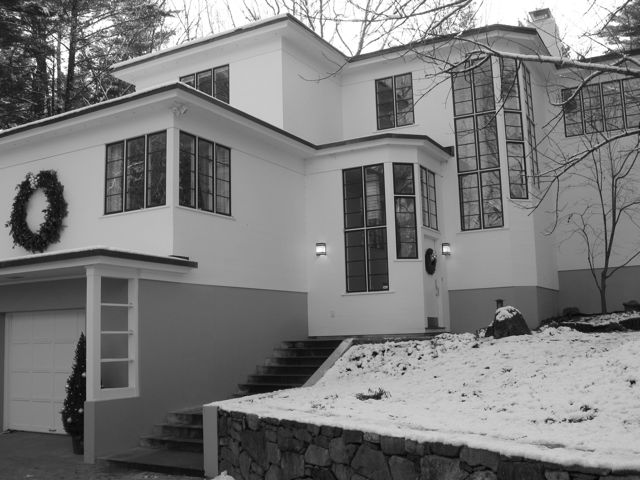 Rare Type of House
According to McAlester’s Field Guide to American Houses, this type of house is rare not only in Weston but throughout the country:

This avant-garde and primarily architect-designed style is relatively rare. Most landmark examples date from the 1930s and occur principally in fashionable suburbs in the northeastern states and in California. Following World War Ii, certain elements of the style became softened into a more widespread vernacular called the Contemporary style.

Preferences
In the decades separating World Wars I and II, Americans tended to prefer period houses that reflected past traditions, while European architects emphasized radically new designs that came to be known as International Style architecture. During the 1930s these ideas were introduced into the United States by several distinguished practitioners who emigrated to escape the developing chaos in Europe. (p.469-70)

Ned Goodell
Further research is needed into the career of Ned Goodell, who lived in Wayland and is thought to have been influenced by the work of Walter Gropius.
Minutes / Agendas
Stay Informed
Weston Maps Online